You are here:Home / News / LATE SEASON SOLD TO KINO POLSKA 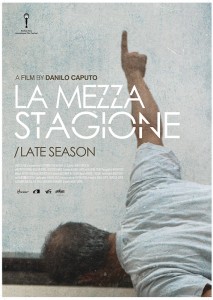 The Film was wordly premiered at last Karlovy Vary International Film Festival and it’s about to have also its Asian and Italian premiere.

LATE SEASON
A small village where all change seems impossible. Three stories spelled out by sounds and noises.
Cesare, a wanna-be electronic musician, is inspired by the sounds that he records around town and that he turns into music. Giovanni works night shifts at the local hotel but cannot get any sleep during the day because of all the noises surrounding him. Carosina, oppressed by the harsh voice of her dead father, will have to go through a strange ritual to free herself.

DANILO CAPUTO
Danilo Caputo (b. 1984, Taranto, Italy) studied music in San Francisco, liberal arts in Berlin, and philosophy in Naples. For his own production company, Taratata Film, he wrote and directed the award-winning shorts Dust (Polvere, 2008) and Banduryst (2009). In 2010 he participated in the Berlinale’s Talent Campus. He also produced his first feature Late Season (2014), winning the Mattador International Screenwriting Award for the script. At present he is working on the short film The Provinces (Province).

More info will be available soon.