You are here:Home / News / DISRUPTED - AWARD IN SAN SEBASTIAN 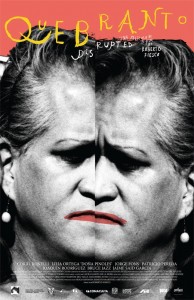 The Jury of the Sebastiane Award, granted every year by Gehitu (Basque Gay, Lesbian, Transgender and Bisexual Association) at the San Sebastian International Film Festival, has decided to grant its SEBASTIANE LATINO 2013 AWARD to the Mexican production:

for its reflection of the suffering – quebranto in Spanish – caused in transgender people by the lack of social understanding and rejection that condemns them to leaving home no more than occasionally to go to work, thereby complicating an already difficult personal process.
Quebranto proposes an entertaining game between fiction and reality in a documentary that releases information in little doses throughout its footage to create an intrigue that traps us gently but firmly, giving us a look at what it means to realise, feel and initiate a process of transgender change.

The jury appreciates its sobriety, its avoidance of the temptation to give in to sensationalism, a fact that does nothing to prevent it from reflecting, with enormous courage, dignity and respect, the reality and vulnerability of its characters, with a deep and beautiful ending. The jury also values the endeavour to recover the memory for Latin American cinema, in this case Mexican, of those who have been relegated to oblivion by the industry.

The Sebastiane Latino is born as an extension of the Sebastiane Award, which turns 14 this year. It is born from proximity with Latin America and from the commitment of the Film Festival to its cinema, accredited in sections such as Horizontes Latinos and Films in Progress. From this proximity and from the repercussion of an International Festival, this award wishes to contribute to ensuring that the values of respect and sexual freedom spread in Ibero-America to combat male chauvinism and intolerance.
In a globalized world, where we feel increasingly closer to other countries, cinema can do a great deal to provide references as the basis of respect for the different ways of being, seeing life and feeling.

The Jury watched some 30 films from different countries. Although it only chooses one of them, the aim of their work is to support and recognise all those who have made them possible and to act as a loud speaker for the growing tendency of Latin American cinema to defend LGTB people.

Disrupted is represented by The Open Reel: world sales agency and festival booking.