You are here:Home / News / CLUB AMAZONAS BY ROBERTO FIESCO 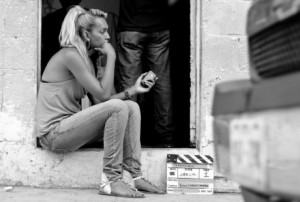 The Open Reel picks up the new short documentary directed by Roberto Fiesco, Club Amazonas: a new step in the collaboration with the director of Quebranto and Tremulo whom we are proud to represent.

CLUB AMAZONAS
Many types of legal and social oppression cause people to leave their homelands, including misogyny, homophobia, and transphobia. The documentary Club Amazonas features two young transwomen from Honduras, Jessica and Angela, who seek tolerance and opportunity across the Mexican border while pondering the freedom and security promised by the U.S.

A producer and film director, Roberto Fiesco was born in 1972.
Among the long feature films he has produced, A Thousand Clouds of Peace Fence the Sky, Love; Your Being Love Will Never End (2003) and Raging Sun, Raging Sky (2008), both directed by Julián Hernández were awarded with the Teddy Award at Berlinale in 2003 and 2009; Broken Sky also directed by Julián Hernández was included in the official selection of Berlinale 2006.
Fiesco has also produced: Partes usadas by Aarón Fernández (2006), winner of the Mayahuel Prize for the Best First Feature Film at Guadalajara Film Festival, Todos los días son tuyos by José Luis Gutiérrez (2007), Espiral (2007) by Jorge Pérez Solano and Martín al amanecer (2009) by Juan Carlos Carrasco.
As a film director he has realised several short feature films such as Actos impuros, Paloma, Arrobo and David, winner of the IMCINE National Short Film Competition, and of the Guadalajara, Morelia and Turin LGBT Festivals. David also won the prize for the Best Actor at Huesca Film Festival and was the only Mexican short film to take part to Cannes Film Festival’s 2006 Critic’s Week. Disrupt marks Roberto Fiesco’s debut with the long form documentary. Estatus and Trémulo are his latest short film productions.