You are here:Home / News / A YOUNG POET: SILVER AWARD AT SPIRIT OF FIRE IFF

A YOUNG POET: SILVER AWARD AT SPIRIT OF FIRE IFF

Another award for A Young Poet, after the Special Mention al Locarno Filmmakers of the Present, and the Students Award in Katowice: the debut film directed by Damien Manivel wins the Silver Award at Spirit of Fire Film Festival in Khanty-Mansyis (Siberia).

After its last screenings in Rotterdam, Paris and Berlin, A Young Poet will be part of upcoming Murcia International Film Festival. More Over, the film is about to have, among others, its Brazilian, French and Uruguayan distribution, thanks to Supo Mungam Films, Shellac and the Cinematheque in Montevideo. 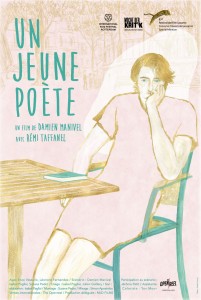 News
I AM HAPPINESS ON EARTH SOLD TO FRANCE
THE SILLY ONES AND THE STUPID ONES AND GRAND STREET IN PUNTA DE L’ESTE
Search.
Latest News.