You are here:Home / News / THE OPEN REEL ACQUIRES THE BEAR TALES 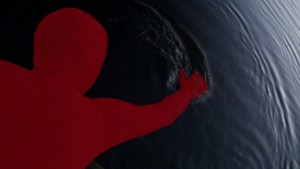 The Open Reel deals on the acquisition for sales and festivals purposes of the first long feature film directed by Italian duo Samuele Sestieri and Olmo Amato: The Bear Tales (Italy, Finland, Norway, 2015, 67 mins). The Bear’s Tales represents a low-budget project born from a real challenge: filming in two people only, during a forty days long trip across Finland and Norway.
Samuele Sestieri and Olmo Amato covered all the tasks necessary for filming from the production to the direction, from the photography to the acting.
Wordly premiered in Competition at the last Torino Film Festival, produced by Samuele Sestieri and Olmo Amato, with the associate production of Mauro Santini and his Offsetcamera, The Bear Tales is a film set in a world that has been abandoned by humans, in which a mechanical monk follows a strange little red man. After crossing forests, dead cities and desolate plains, the two odd characters reach the top of a magic hill. The discovery of a torn teddy bear who’s in bad shape reconciles the two. They join forces, in hopes of bringing the inanimate toy to life and escaping the void that surrounds them.

Samuele Sestieri (Rome, Italy, 1989) graduated in directing and screenwriting from the ACT Multimedia Film Academy.
He has written, directed and edited over ten shorts, including Danza al tramonto (2012), presented at the CinemAmbiente festival of Turin. He is also a film critic for various websites: he founded the blog “Schermo bianco” and is one of the editors-in-chief of the movie magazine “Point Blank.”
Filmography
2012 – “Danza al tramonto”, shortfilm
2015 – “I Racconti dell’Orso” (The Bear Tales)

Olmo Amato (Rome, Italy, 1986) graduated in neurobiology from Rome’s La Sapienza University. A professional photographer and video maker, he is involved in fine-art prints, post-production and teaching. He also curates the photographic archive of the Alberto Moravia Fund. His photographic projects “Rinascite” (Rebirths) and “Sogni, memorie e incubi dalla metropolis” (Dreams, memories and nightmares from the metropolis) were selected for the Photo Kathmandu festival and the 2014 Young Illustrators Award in Berlin.
Filmography
2015 – “I Racconti dell’Orso” (The Bear Tales)