You are here:Home / News / THALA MY LOVE, BY MEHDI HMILI

THALA MY LOVE, BY MEHDI HMILI 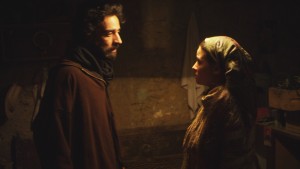 Beginning of January 2011, during the Tunisian revolution, Mohamed, a political prisoner, escapes from jail and returns to his native town Thala. He finds it in the midst of a revolt. He has only one goal: to find his fiancée Hourya. Mohamed is helped in his flight by Belgacem a coalman and former agent of the regime who is hoping to be redeemed. He hides Mohamed in his garage. On the night of January 9th, Mohamed witnesses yet another slaughter. As he carries the dead body of a young man to hospital, a young protestor films him on his cell phone and the video is uploaded on Facebook. Meanwhile, we discover Hourya who lives with her husband, Adel, a quiet man who has accepted her past but forbids her of taking part in any political activity. Hourya who was raped in prison after Mohamed’s arrest, believes that Mohamed has died under torture and to save her own life, she accepted to get married to Adel whom she does not love. In Kasserine, Hourya is still committed to the struggle against Ben Ali. She provokes a strike at the textile factory and risks her life distributing tracts in the streets crowded with policemen and agents of the regime. After watching the video on Facebook and discovering that Mohamed is still alive, she decides to leave her husband and go to Thala to meet him.

Mehdi Hmili was born in Tunis and graduated from the Paris Film School. Whilst in France, he directed his trilogy in black and white about love and exile X-Moment 2009, Li-La (2011), and The Night of Badr (2012). Hmili is also a popular poet in Tunisia known for his poems against the regime of Ben Ali. He lives between Tunis and Paris.