You are here:Home / News / THE OPEN REEL IS EXECUTIVE PRODUCER AND WORLD SALES OF JUST PAST NOON ON A TUESDAY BY TRAVIS MATHEWS 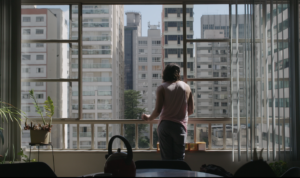 The Open Reel is executive Producer and World Sales of
Just Past Noon On A Tuesday
the new short film directed
by Travis Mathews
with Gustavo Vinagre and Ronaldo Serruya
The Open Reel boards Travis Mathews’s new short film Just Past Noon On A Tuesday (Brazil/USA, 2018, 22′), shot in São Paulo and produced by João Federici, with the executive production of The Open Reel and Himeros TV.
***The film is currently in post-production and will be available by early 2018.***
Starring film director and actor Gustavo Vinagre, Ronaldo Serruya and Lavínia Pannunzio, Just Past Noon on a Tuesday is about two strangers who visit the penthouse of a recently deceased lover, only to find themselves learning more about each other.
director, screenwriter & editor
Travis Mathews
with
Gustavo Vinagre, Ronaldo Serruya & Lavínia Pannunzio
voice over
João Federici (tricker) & Marco Donini (Marco)
DoP
Matheus Rocha (Theuba)
sound
Jonathan Macias Ramirez
producer
João Federici
executive production
The Open Reel & Himeros TV
world sales
The Open Reel
TRAVIS MATHEWS
Born in Ohio, USA in 1975, he is a director, screenwriter, editor and producer with a background in Psychology. He has primarily concentrated on topics such as masculinity and intimacy between gay men.
He collaborated with James Franco on the docu-fiction Interior. Leather Bar which screened at over 75 international film festivals, including Sundance, Berlinale and Rotterdam.
His most recent feature film, Discreet (2017), premiered at The Berlinale and continues to play festivals worldwide.
Filmography
2018 Just Past Noon On A Tuesday; short film
2017 Discreet
2013 Interior. Leather Bar
2013 In Their Room London; documentary
2012 I Want Your Love
2011 In Their Room Berlin; documentary
2010 I Want Your Love; short film
2009 In Their Room San Francisco; short documentary
2005 Do I Look Fat; documentary