You are here:Home / News / New Acquisition: STROKING AN ANIMAL by Ángel Filgueira

A Galician filmmaker, Ángel Filgueira studied Audiovisual Communication at University of Vigo and Master’s degree in Art Investigation at the UCLM. His films include the documentary Sevilla y Gomorra (2018) premiered at Cineuropa Film Festival (Santiago de Compostela) and his short films Burdeos-Porto, El Cuadrado and FIN, wich were presented at Cineuroupa and Curtircuito IFF. Stroking an Animal is his first feature film and with this project he has participated in different development and work-in-progress laboratories such as Gijón FICX PRO, Abycine Lanza, Novos Cinemas #LAB (Pontevedra) or IMPUT at S8th A Coruña Film Festival. 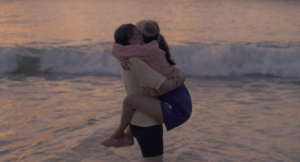 News
IT IS NOT THE BRAZILIAN HOMOSEXUALS at the Leipzig Queer Movie Days
New Acquisition: A PLACE OF OUR OWN by Ektara Collective
Search.
Latest News.