You are here:Home / News / LIVING HIGH LIFE BY FABIO LELI 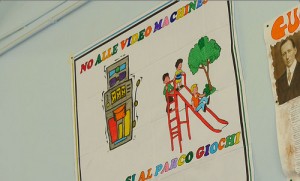 The Open Reel represents now the first long documentary project Living High Life (Vivere alla grande) directed by Italian Fabio Leli and produced by Human Tree, in collaboration with Banca Etica, Libera Puglia and the support of Compagnia Sharahzad. The film has been premiered out of competition at the last Locarno International Film Festival and at the last Milano Film Festival for Italy.

Italy is under attack. The invader is not a foreign country. The enemy has an easy recognizable face, but its presence is now so strong and rooted, that is almost considered an ally by the Italian Government. The enemy is legalized gambling, a perfect machine that works on several levels, and that the last year has sucked Italians 100 billion euro.It sucked, but spontaneously. It seems an invisible and involuntary tax, a poor’s fee. The invasion develops economically, but also territorial, political, social, and cultural media. It’s a vicious cycle involving all these aspects and modifies them for the top goal: profit. But a profit of a few, in contrast to the suffering and poverty of many, too many. Undoubtedly because the only sure way to win and accurate with gambling is just one: handle it.

Speaking of gambling in 2015 could be “fashionable”, since lately we hear journalistic voices about scandal on TV. But the subject is treated in the same manner with which the media treat any other subject, or with detachment, pointing to the audience rather than to information. They talk about numbers, about how the legal gambling gives a return to the State or companies who run it, about how many players get sick of “game addiction” (a journalistic term that does disgust, because the playful aspect here has nothing to do) or maybe they show on tv hooded people sentenced, front of a wall, to tell how much money they threw away in gambling, when maybe they hide behind a lot more than just figures of money. But above all where were those same journalists, when in 2009 the crisis gripped the Italian population, which even then was beginning to pour so manic in tobacco shops, bingo halls or in front of slot machines?

FABIO LELI
After graduating in Communication in 2009 and graduated in Direction and Screenplay at the Academy of Cinema and Television “Griffith” of Rome in 2011, he wrote and directed two short films: The Ways of Poker Are Endless and Beyond the Sea. He worked as assistant director on several national and international sets, including Run Away, the award-winning web series nationally and internationally, and was co-writer and translator for the film Guido Superstar of the Italian-Canadian director and actor Silvio Pollio. In 2014 he made his first documentary film Living High Life, whose short version opened the Notorious Film Festival of Cagliari and The Social Networld – A Love Story, the award-winning short film screened at the National Institute of Culture “Roberto Rossellini” of Los Angeles. In 2015, he has completed the feature film version of Living High Life, premiered at the Locarno International Film Festival.