You are here:Home / News / ANNOUNCE EARTHQUAKES BY CALIRI-MARCOW 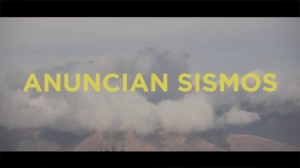 The Open Reel acquires international rights for sales and festivals of the title Announce Earthquakes, Argentinian debut to the first feature film, directed by Rocío Caliri and Melina Marcow, and recently premiered at Bafici.

A wave of teenage suicides hits an Argentinian Northern town. The protagonists live in a world where there’s only room for consequences. Based on a true story, the film is produced by Hulot Cine Productions.

They filmed their first movie Announce Earthquakes in Jujuy, a state in the north of Argentina. The film recently had its world premiere at BAFICI 2014, in the Panorama section.

Their second project was titled Yarará. Actually they are working on the pre-production of The Child. Meanwhile they are writing with Laura Derpic from Bolivia, an original script named Tinkuy, planning to make it a movie in july 2014 in Potosí, Bolivia.

News
WANDERING CLOUDS AT OUT TAKES 2014
PEYOTE, ANOTHER STORY FROM MEXICO FOR THE OPEN REEL
Search.
Latest News.