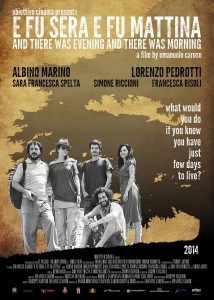 The Open Reel acquires rights for the international sales of And There Was  Evening and There WasMorning, the first long feature film directed by Italian Emanuele Caruso.

A low-budget production, starring Albino Marino, Lorenzo Pedrotti, Sara Francesca Spelta, Simone Riccioni, Francesca Risoli, And There Was  Evening and There Was Morning is having getting already great distribution results and getting a grewing visibility in all the Italian territory.

In the main square of the town of Avila, everybody is celebrating the feast of Saint Eurosia, protector of earth’s harvest. But something is happening in the village bar…