You are here:Home / News / WASTE AFRICA AWARDED IN BOLOGNA 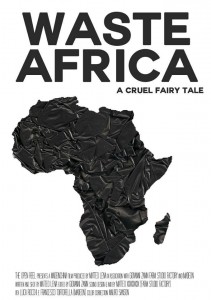 Waste Africa by Matteo Lena has been awarded with the second prize for the competitive section Environmental Visions at Festival Italian Visions, in Bolgona.

WASTE AFRICA
Waste Africa is a cruel fairy tale about a little prince called Samsung. Fatherless, abandoned by his mother, Samsung will have to restore prosperity and future to his land, covered with garbage.
MATTEO LENA
Matteo Lena is born in the northern Italian countryside. He now lives in Rome and works for the Italian television. He made a journalistic scoop in 2007, revealing sadomasochistic homosexual appointments inside Vatican and he won the Ilaria Alpi Prize, an important journalistic reward, for Hands on Palermo, a 100′ documentary about Cosa Nostra, broadcasted in 2008.