The Open Reel is at the Cannes Marché du Film selling its newly-acquired Spanish feature “Mía and Moi” (“Mia y Moi”) from director Borja de la Vega. There, the company has already closed sales on the feature to Dramarama in the U.S., Cinemien in Benelux and German-speaking territories and OUTtv in Israel, Spain and Scandinavia.

The Open Reel has also dealt Marius Gabriel Stancu’s “It’s Just in My Head” to Dramarama and Alberto Fuguet’s documentary “Everything at Once” to TLA for North America. Both also sold to popular Spanish streaming platform Filmin. Lithuanian feature “People We Know Are Confused” from Tomas Smulkis was picked up by SPI International.

Stancu’s “It’s All in My Head” is a coming-of-age tale about two young men who return to their hometown from college each summer, where one spends the sun-drenched weeks pining for his lifelong friend. Another summertime story, “People We Know Are Confused” unspools over four hot days in Vilnius as several stories of personal discovery intersect.

Sales have been strong in the first half of the year on Fuguet’s “Everything at Once,” which had already been picked up by Paris-based Optimale Distribution for France and French-speaking territories, Matchbox Films for the U.K. and Ireland, Outscreen for Australia/New Zealand, and Salzgeber & Co. Medien for Germany and Austria. Tongagiro Releasing has taken rights to Poland. 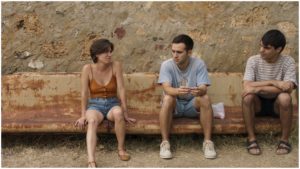