The Open Reel deals with German production company Cosmic Productions on the acquisition of the feature film Boy Meets Boy, directed by Daniel Sánchez López, starring Alexandros Koutsoulis and Matthew James Morrison and produced with Lucía Sapelli and the co-production of Taiwan based company GagaOOLala.

Harry has been partying for 48 hours when he meets Johannes on the dance floor of a club in Berlin. With 15 hours until his flight home, Johannes offers to help him print his boarding pass. This mundane task leads to a day together wandering the city. The contrasts in their lives and values force each one to confront their own truths. Boys Meet Boys is a feature length mumblecore about the journey of a brief encounter: the mark left by a fleeting moment of joy.

Daniel Sánchez López is a writer and director. He was born in 1990 in a rural town in La Mancha, Spain. He studied media in Madrid and holds a postgraduate degree in History and Aesthetics of Film and Fiction from the European Film College in Denmark. His final film in this school, The Pretty Things Are Going To
Hell (2015), was selected for the 21st edition for LesGaiCineMad and the Durban Gay and Lesbian Film Festival. Daniel has been part of the Doc School of Locarno Film Festival in 2017 and studied Low budget production in the International film school of Cuba in 2018. Since 2015 he has called Berlin home, where he founded Cosmic Productions, an audiovisual company that makes music videos, spots and short films. Saft (2017) is his latest short film which has been selected for the Visionär Film Festival, KARSHISH Mumbai International Queer Film Festival in India and the Outfest Peru. Boy Meets Boy is his feature film debut. 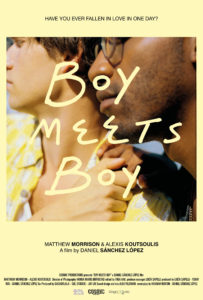