The Open Reel has acquired international sales rights to Jessé Miceli’s debut feature “Coalesce,” a film portraying contemporary youth in Cambodia. The movie was part of the ACID section of Cannes 2020.

“Coalesce” follows the journeys of three teenagers in today’s Phnom Penh, the capital of Cambodia. Songsa is an introverted teenager who travels to the big city with his family to sell clothes in a tuk-tuk; Phearum goes into debt to buy a taxi and confronts the unexpected; and Thy dives into the nightlife and dreams of joining a biker crew. All three characters give a different perspective on the fast-changing Cambodian society.

“Coalesce” stars Songsa Sek, Phearum Eang, Rithy Rom and Lek Vann. Miceli, who is passionate about Cambodia, previously produced the film “Khmer” in 2019 with Cambodian actors and a local crew. He’s also been involved in distributing heritage films around the world.

“Jessé Miceli’s first feature film is a crazy movie, an unidentified object that seems to come straight from Mars but which was actually shot in Phnom Penh, Cambodia,” described Alain Raoust in a review for the film posted on the website of ACID. “Without any transitions, a series of fragmented micro stories end up forming a visual poem whose aim seems to be to gather all the scattered parts of its narrative,” added Raoust.

In addition to its selection in Cannes’s ACID section, “Coalesce” was also selected a Busan as part of the Window on Asian Cinema lineup, as well as at the Asian Pacific Screen Awards Brisbane.

“Coalesce” was produced by Horoma Films in Cambodia, and co-produced by Perspective Films in France, with the participation of Kampuchea Tela Co. and KlapYaHandz. 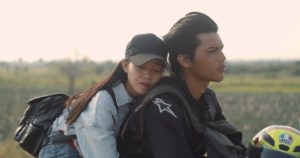 News
SPECIAL AWARD for Marc Serena and THE WRITER FROM A COUNTRY WITHOUT BOOKSTORES in Alexandria
A STORMY NIGHT awarded at FanCineGay
Search.
Latest News.