You are here:Home / News / THE OPEN REEL PICKS UP PORTUGUESE FEATURE AL BERTO BY VICENTE ALVES DO Ó 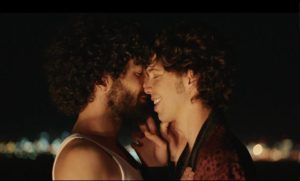 Just released in Portugal, the film is now available for festivals booking and international sales.

AL BERTO
The film takes us back to 1975, when the winds of change were blowing over post-revolutionary Portugal. Al Berto returns to his small village, Sines, after several years in Brussels, where he was trained as a painter. Now, he is a wannabe poet who will soon bewitch some of Sines’ youngsters, just as he will incur the wrath of the most conservative locals. Settling illegally in a mansion that had been expropriated from his family during the revolution, young Al Berto begins to hang out with locals who share his interest in the arts and dream of a different life. Among them is João Maria, who will soon become Al Berto’s lover. He was, in real life, the director’s older half-brother. Together, Al Berto and João Maria will go on to provide Sines with its well-deserved trendy scene, its movida, which included the opening of a bookshop downtown, and some extravagant parties at the old mansion.

News
THE PARK IN HIROSHIMA
THE BEACH HOUSE AND UPON THE SHADOW IN NEW YORK
Search.
Latest News.