You are here:Home / News / THE OPEN REEL ACQUIRES GRIMSEY BY RICHARD GARCIA AND RAUL PORTERO

New Acquisition for The Open Reel, representing now the Spanish feature film Grimsey, directed by Richard Garcia and Raul Portero.
.
A La Panda, Pony Film and Doce Entertainment production, with the collaboration of Zentropa Spain and ECAM, the film stars the two directors, together with Nacho San José and David Krohnert among others. 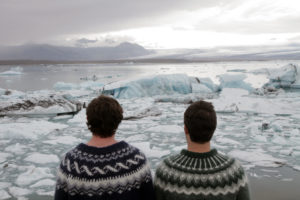 After breaking up with Norberto who ran away to Iceland, Bruno wants to find him. Arnau, a local tour guide in Reykjavik, will enroll in his quixotic search. Their trip will become a grieving process until they reach the remote island of Grimsey. There, Bruno will have to learn what love really means in order to move on with his life.

With his short Taboulé, Richard Garcia was selected by MoMA and Film Society Lincoln Center NY for the New Directors/New Films festival and won many international festival awards including the National Radio film contest, Capalbio, Molisecinema, Huelva, Puerto Rico and LGTB film festivals in Zurich, Bern, Hamburg, and Valladolid. Taboulé was also part of the official selection at Raindance UK and Melbourne Queer Film Festival and a finalist for the Spanish Academy Awards (Goyas) in 2012.
His previous short Ana´s Way starring Marisa Paredes, won at Malaga International Film Festival and was also part of the official competition of several international festivals, including Tribeca IFF, Guadalajara FICG and São Paolo Mostra do Cinema.

Raúl Portero published his first novel at age 26; it was entitled La vida que soñamos (2008), and was a winner at the 4th Terenci Moix Award. Since then, he has published three more novels: La piel gruesa (2009), Reykjavík línea 11 (2012) and La canción pop (2017).
Grímsey is his first feature film.