You are here:Home / News / THE OBJECTS OF LOVE BY ADRIAN SILVESTRE

THE OBJECTS OF LOVE BY ADRIAN SILVESTRE 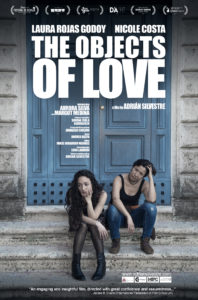 The Open Reel deals with Spanish director Adrian Silvestre on the acquisition of his first feature film The Objects of Love (Los objectos amorosos), starring, among others, Laura Rojas Godoy and Nicole Costa, wth the associate production of Simone Isola at Kimera Films.

The film, now available for sales, was premiered at last Seville European Film Festival, and since then has travelled through several film festivals (such as the D’A Film Festival in Barcelona, the Atlantida Film Festival in Palma de Mallorca and the Novos Cinemas in Pontevedra ), winning several prizes, such as the FIPRESCI prize in Seville for the Best Film, the Best Film prize at Queer Lisboa, the Audience award at Sicilia Queer, the prize for the Best Direction at Bilbao Zinegoak, and the prizes to the leading actress at Queer Lisboa and Bilbao Zinegoak again, and at Madrid Lesgaicinemad.

THE OBJECTS OF LOVE (Spain, 2016, 115′)
Luz leaves to Italy in search of a better future, leaving her two year-old son in the care of her family back in Colombia. Her European dream, however, starts to wither away as she becomes the victim of a series of misfortunes. Luz takes on her new social status and starts from scratch working as a cleaner. She unexpectedly meets Fran, a person so extraordinary that makes her overcome all her preconceptions. Together, they decide to be the owners of their lives: the entire world is before them and Rome at their feet.

ADRIAN SILVESTRE
Adrian Silvestre was born in Valencia in 1981, he was graduated in Audiovisual Communication from the Complutense University of Madrid and got a degree in Film Direction from the School of Cinema and Audiovisual de Madrid (ECAM). He also got a Master of Contemporary Art History and Visual Culture at the Autonomous University of Madrid and the National Art Museum Queen Sofia. He has also followed a specialization in Developement of Cinematografic and TV projects and another one in Curating Film Festivals at the International School of Film and Television of San Antonio de los Baños (E.I.C.T.V.) in Cuba. In 2015, he was grant holder at the Royal Academy of Spain in Rome and at the French Academy / Casa de Velázquez. He directed many shorts, such as La primera suplente (2004), Soliloquio (2007), Natalia Nikolaevna (2014), before making his first feature in 2016 : Los Objetos Amorosos (The Objects of Love).

News
GOTTHARD – ONE LIFE, ONE SOUL AND IL NIDO AT THE 41 MOSTRA SAO PAULO
THE OBJECTS OF LOVE IN HAMBURG
Search.
Latest News.