You are here:Home / News / NEW SALES ON VARIETY

At Swiss doc fest Visions du Réel with Cannes ACID premiere “Coalesce,” Torino-based The Open Reel has closed a raft of deals on its current sales titles, led by Chilean Alberto Fuguet’s “Everything at Once: Paco and Manolo’s Gaze.”

“Being specific titles, and referring to a specific audience, even if in constant expansion, LGBT titles – not only feature films but also documentaries and short films – respond to the constant demand of a slice of the market that is always very receptive to fruition,” said The Open Reel founder Cosimo Santoro. “Consequently, they represent a good guarantee of promotion and sales on a large scale, even in a complicated time like this,” he added.

‘Everything at Once: Paco and Manolo’s Gaze’

In its first deals, “Everything at Once,” a film essay, has been acquired by Paris-based Optimale Distribution for France and French-speaking territories, “Skinny Sister” distributor Matchbox Films for the U.K. and Ireland, Outscreen for Australia/New Zealand, and Salzgeber & Co. Medien for Germany and Austria.

2018’s “Cola de Mono,” Fuguet’s first LGBTQ movie, added a explicitly homoerotic edge. “Everything at Once” (“Todo a la Vez”) closes a trilogy centered on the male body which also

“Everything at Once” weighs in as a homage to Paco and Manolo, two now 50-ish Catalan photographers from the outskirts of Barcelona who publish and take photos for Kink, a homoerotic fanzine in which young working class men pose nude in scenes of often pastoral beauty, rendering photos which have “an essentially Mediterranean homoerotic aesthetic,” according to the film’s synopsis.

In fly-in-the-wall scenes, the photographers, a 30-year couple, talk about their life, work methods and culture as Fuguet records their photo-shoots. “About the body and male beauty,” the film tackles themes such as “male shyness and the idea of nakedness and vulnerability,” Fuguet said. The doc feature ends up, however, as “a love story about when Paco met Manolo met and how their relationship made them create and grow as artists.”

Berlin’s GMfilms has acquired another new The Open Reel title, “El Fulgor.” Directed by Argentina’s Martin Farina (“Taekwondo,” “Fulboy,” “Nomad Women”), it studies how Argentine “gaucho” cattle herders prepare for a local carnival which is loaded by homoeroticism. “The bucolic landscape mixes with the city streets. Slowly, everything fills with color, feathers and semi-naked men. Face masks begin to cover the faces and alcohol disinhibits the bodies,” the synopsis runs. (”El Fulgor” is not to be confused with Marco Berger’s Bafici world premiere “The Carnival,” on which Farina served as DP.)

London-based Bohemia Media has taken all rights to the U.K. and Ireland on “Leading Ladies,” a women’s reunion drama directed by Spain’s Ruth Caudeli (“Second Star on the Right”). It has also picked up Ferrán Navarro Beltrán’s “The Silent Generation,” a series of interviews with Barcelona’s older LGBTQ generations, as well as Benedito Ferreira’s “The Last Image,” the story of the sometimes difficult relationship between the director and his subject, France-based blind poet Benedito Senna.

Jessé Miceli’s debut feature “Coalesce,” has sold, as previously reported, to Ariztical for North America as well as to Southern Asian Portico Media.

Playing South Korea’s Busan Film Festival and now Visions du Réel’s Latitudes section, the well-reviewed feature builds as a portrait of Phnom Penh youth via the dreams and challenges of three figures in the now boom city: Songsa, who works at his father’s clothes store; gay bar host Thy; and taxi driver Phearum. Shot with a sense of continual movement, “Coalesce” captures the energies of a modern Cambodia, flush with big business investment. The question is whether poor locals, such as the film’s trio of protagonists, can get any slice of the action.

Additional sales just concluded: A Stormy Night was caquired by UK company Bohemia Media and shorts Ten Times Love and It Is Not the Brazilian Homosexuals Who Are Perverse but the Situation in Which They Live by French company Optimale. 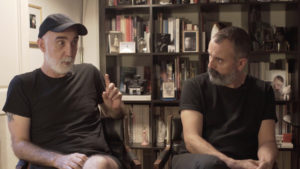