“Petit Mal,” in which Caudeli also stars, is centered around three young women, Martina, Laia, and Anto, who are in a passionate, playful three-way relationship — the dynamic of which is reshaped when one is called away for a long-term project.

The pic, which premieres in Tribeca’s Viewpoints section, is loosely based on the director’s personal life experiences.

“Petit Mal” is Caudeli’s third feature segueing from her exploration of somewhat similar themes in “Eva + Candela” (2017), in which a female filmmaker falls in love with her leading lady, and “Second Star on the Right” (2019), about a 30-something bisexual woman who refuses to grow up.

Open Reel in other deals germinated from Cannes has pre-sold Spain-based Italian director Riccardo Tamburini’s directorial debut “A Dice With Five Sides,” which was launched at the Marché with a rough cut teaser, to U.S. and London-based specialty LGBTQ entertainment distributor TLA Releasing for North America and the U.K. and for France and French territories to Optimale, with whom TLA has a partnership.

“A Dice With Five Sides,” which is about the consequences of a meeting between two male strangers who meet in an apartment for a sex date, was also picked up by Cinemien.de/Pro-Fun for Germany and German-speaking territories.

TLA has also taken U.K. and Ireland rights on Israeli first time director Eyal Kantor’s “Like Me,” which is about a high school senior who is being forced by his father to leave home while being in a complicated relationship with a fashion photographer who is older than him, and also secretly in love with his close friend Gilad.

“Like Me” will be premiering at the Guadalajara Film Festival. 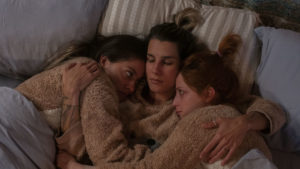