You are here:Home / News / NEW ACQUISITION: DRAMARAMA by Jonathan Wysocki

Dramaramais set in Escondido, California, 1994. It’s the end of summer and Gene is preparing for his high school drama friends’ final murder mystery slumber party. The theatrical hostess, Rose, will fly off to start college the next morning, followed by earnest Claire, magnetic Oscar, and sarcastic Ally. Yet Gene has bigger problems than being left behind by his best friends: he wants to come out of the closet – but is terrified of what his sheltered Christian group might think. Jonathan Wysocki’s nostalgic, funny debut feature is a poignant love letter to drama nerds, late bloomers, and the intense friendships of youth.

Jonathan Wysocki is a Sundance Screenwriters and Directors Labs Fellow as well as an Advisor for Sundance Co//ab. He’s made 5 award-winning short films. His latest, A Doll’s Eyes, screened at 50 festivals across 6 continents and was translated into 8 languages. Film accolades include the Sundance Lynn Auerbach Screenwriting Fellowship, the Busan Cinephile Award, the Stanley Kramer Award, the James Bridges Award, and two Annenberg Grants. Previously, Wysocki worked as a programmer for the LA Film Festival, as a producer on the indie features The Hammer and Thrasher Road, and for major studios such as MGM and ABC. Wysocki is a UCLA alumnus, a Project Involve Fellow at Film Independent, a Berlinale Talent Campus alum, and a lecturer at Occidental College, Chapman University, and Cal State Long Beach. Wistful about his drama nerd days, he compensates by being as dramatic as possible in the present. 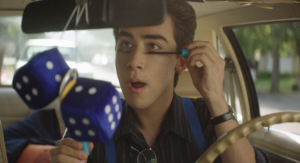 News
TATTOO OF REVENGE at the Amsterdam Transcreen
THE BIRDS FLY TOGETHER in Competition at the Brussels International Short Film Festival
Search.
Latest News.