You are here:Home / News / *NEW ACQUISITION: 8 YEARS by JD ALCÁZAR

8 Years is the last film entirely shot on the island of La Palma before the eruption of the volcano, and narrates the reunion of Jose and David. After a year without seeing each other, they decide to meet again in the place where they met the first time. Beyond the desire to fall in love again, or give themselves a second chance, the energy of the place will change their lives forever, in a vital journey that they will never forget.

Following his career as an architect, JD trained as a screenwriter and film director at the Bande à Part school in Barcelona. He is co-director of the film La Vecina de al Lado (2020) and winner of the 2018 Frame Scholarship from the LENS Visual Arts Schools. His documentary Caminito del olvido (2019) begins its journey in national and international festivals with the help of Yaq Distribución. Among his shorts, titles Fuerte y Poderosa (2015) and Marta por inside (2017) have toured in International Festivals and broadcast on television. 8 Years is his first feature film. 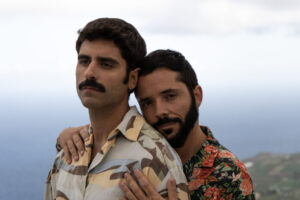