You are here:Home / News / NEW ACQUISITION "15 HOURS " by Judith Colell

Leading Italian sales agent and production company The Open Reel has acquired the rights to “15 Horas” from filmmaker Judith Colell (“Elisa K”), world premiering on Tuesday June 8 in the main competition at the Malaga Film Festival, with two more screenings scheduled for the following day.
Colell long ago established herself as an important voice in the Spanish film industry chorus when in 1996 she received a Spanish Academy Goya Award nomination for her short film “Escrito en la piel.” Since then, the auteur has been nominated for a handful of Catalan Academy Gaudí Awards and in 2010 won the Special Jury Prize at San Sebastian for her mother-daughter drama “Elisa K.”
With “15 Horas,” Colell disects the story of a perfect couple, Aura and Manuel. She, a first chair violinist and he, the orchestra’s suave conductor, are the envy of their peers and standouts on the local cultural scene. Of course, not all is as it seems and behind closed doors the marriage is unrecognizable, as Manuel is guilty of a long history of mistreating of his wife. Feeling helpless yet unwilling to continue with the way things have always been, Aura recruits outside help, only to discover her worst fears about the relationship are entirely justified.
Starring and produced by Sterlyn Ramirez, “15 Horas” is a Spanish-Dominican co-production between Turkana Films and Malaga’s own Selene Films. Longtime TV writer Cira Valiño delivered the screenplay. 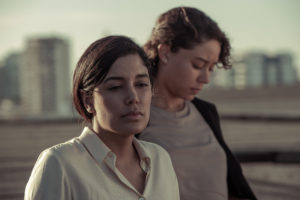