You are here:Home / News / FULBOY BY MARTIN FARINA 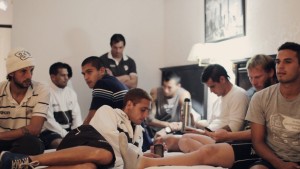 As a work in progress the film was premiered at Bafici last year, and is now available for sales and festivals booking.

FULBOY
On the verge of achieving his dream career, Tomás allows his older brother Martín Farina an inside look at his life as a professional football player. Martín, never able to fulfill his own dream of playing football, steps into the world of Tomás and his teammates through the lens of his camera. However, the rest of the club has their own opinions, some viewing Martín as an intruder, as he exposes their most vulnerable moments, and their concerns for the future after the game has ended. Fulboy offers an uncensored, confessional look at how the athletes behind the most popular sport in the world behave during their time off the field. At the same time, Fulboy reflexively interrogates Farina’s aesthetic choices and point-of-view, as well as the viewer’s gaze at the male form.

MARTIN FARINA
Martín Farina has a degree in Communications, got at the Universidad Nacional de La Matanza. He also studied Music and Philosophy. He as realised several film projects, including La generación de las maestras (2007), premiered in Chile at Festival de Cine Psicoactivo. He regularly produces and directs videoclips and commercials. Fulboy marks his debut with the documentary, and was presented as a work in progress at last Bafici Buenos Aires.

News
STAND, I AM HAPPINESS ON EARTH AND JESS & JAMES AT 29 BRUSSELS TELS QUELS
A YOUNG POET AT MURCIA IBAFF
Search.
Latest News.