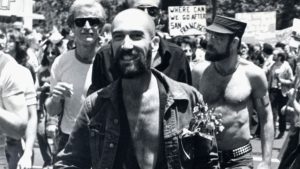 Another The Open Reel title acquired by distributor Cinema Uno, after recent acquisitions of Club Amazonas, The Cult and One Deep Breath.

Also Pamela Varela‘s Passeurs will be now part of the Mexican platform, starting from early June.

Recounting the stories of several personal commitments, Passeurs outlines the key steps of an unprecedented mobilization, telling a story of AIDS which joins in with the wider field of social history. A film which tackles the essential work of coming to terms with our past.
Today, more than thirty years after the beginning of the epidemic, it is possible to look at the cultural and social history of AIDS. AIDS cannot be considered as a meaningful event but as a generator, an initiator, a producer of new activism. The history of AIDS is part of social history, emphasizing more particularly the capacity of invention of associations and new modes of political action. This film will assess and analyse this mobilization through real life stories which highlight the human dimension. We met famous people, characters, unknown people, and associative and political stakeholders in the United States, in France and in Africa. These men and women tell their story, act, remember. They tell how the AIDS virus made an intrusion into their lives and how they still defend today, commitments that are ever more important.