You are here:Home / News / CINE HORIZONTES AWARDS THE SILLY ONES AND THE STUPID ONES

CINE HORIZONTES AWARDS THE SILLY ONES AND THE STUPID ONES 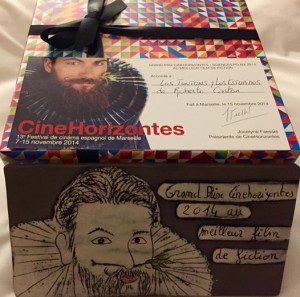 The Silly Ones and The Stupid Ones gets the Jury Grand Prize at Marseille Cine Horizontes.

After the great world premiere in San Sebastian, and the screenings in Toulouse, Saint Jean de Luz, Lisbon, Sao Paulo, Badajoz and Brussels, among others, this award is the first official recognition of the productive efforts made by producer BitArt New Media, and represents the confirmation of Caston’s talent, after the fantastic debut with Ander.

The Silly Ones and the Stupid Ones was released in Spain on last October 3: more screenings will be announced soon.

News
RAUL AT 7 SANTIAGO DEL CHILE CINE// B FILM FESTIVAL
GOYA AWARDS: 19 NOMINATIONS FOR THE SILLY ONES AND THE STUPID ONES
Search.
Latest News.