You are here:Home / News / AGATE MOSS, World Premiere in Competition at the Rotterdam International Film Festival

The Open Reel deals with Lebanese director and artist Selim Mourad on the acquisition of his new project Agate Moss (Mousse Agate) selected in the Tiger Competition at the upcoming Rotterdam International Film Festival.

Agate Moss.
A visit to a cosmetic-surgery clinic and the discovery of a lump in his testicle and an abscess in his mouth confront filmmaker Selim Mourad with transience and decay in this unashamedly navel-gazing film essay. ‘Selim from Beirut’ is the last in a long list of names of extinct species he recites during a loveless Grindr fuck.
After his death, which proceeds without any further explanation or ado, we see Selim’s image appear in an exhibition by a pretentious photographer. As he hangs nonchalantly on the gallery wall – looking like the love-child of Jean-Paul Belmondo and James Dean, complete with cigarette dangling from his lips – a visitor to the gallery comments that the round framing of these portraits of the dead is reminiscent of film. The actual film frame then also adopts this circular form, this time with Selim’s friend Tamara at the centre.
What follows is in many ways like a snake swallowing its own tail, with both maker and work constantly self-referencing; in the eternal cycle of birth and death this creates, Selim and Tamara finally become their own ancestors. The naked, queer body once again plays a prominent role in this concluding instalment of Mourad’s Linceul trilogy – preceded by the shorts Linceul (2017) and Cortex (2018). Using a combination of painterly images, form experimentation, mythical motifs and philosophical commentary, Agate mousse forms an aesthetic antidote to fear of The End.

Director.
Selim Mourad (1987, Lebanon) is a writer, teacher and filmmaker. He has both a bachelor’s and master’s degree in film from Saint Joseph University in Beirut. He directed his first short Lettre à ma soeur (2008) while at university. His first feature documentary This Little Father Obsession came out in 2016. Linceul (2017) premiered at Visions du Réel. 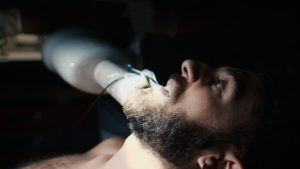