You are here:Home / News / A COUNTRY OF PRIMROSES AND BARRACKS IN TRENTO

A COUNTRY OF PRIMROSES AND BARRACKS IN TRENTO 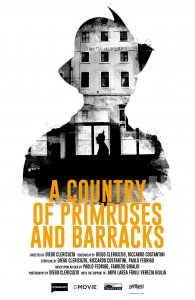 A Country of Primroses and Barracks by Diego Clericuzio has been selected to participate to the 63 edition of the Trento International Film Festival, taking place from April 30 to May 10.

The Film will be part of the “Alte Terre” Section. Screening dates will be available soon.

THE FILM
According to an enquiry carried out by the Ministry of Defense, during the ’60s in Friuli-Venezia Giulia about 102 square km (1.3 % of the whole regional territory) were occupied by military sites where more than 50% of the Italian Army was deployed.
Almost 50% of the region has been influenced by the subsequent servitudes. A close network of barracks, powder magazins,training and aviation camps was spread over Veneto and Friuli-Venezia Giulia, two neighbouring regions, as military strategy. Cities, towns, countryside, valleys, mountains, rivers and the sea represented the elements of a map: friulian landscape turned into a strategic landscape. In 1989, after the fall of the Berlin Wall and the end of the Cold War, the geopolitical situation changed rapidly, therefore Italy abolished conscription. In 2004, also the eastern borders with Republic of Slovenia dissolved, a Country which had declared independence in 1991.
Those historic changes had been followed by a decommission of the Italian Army System, which consequences in Friuli had assumed unique proportions.
A whole system collapsed, followed by people’s stories, professions and passions, resulting in both empty barracks and huge military buildings. It’s like discovering a new room in your own house after decades, and sometimes this room is as big as the house itself or even bigger. The problem is more complex when not only a part of the city is decommissed, but also a whole territory; not a closed part, surrounded by walls and finished, instead a costellation of spots scattered on the whole regional territory.
In those territories people used to live out of the military presence, both economically and socially, therefore they experienced a Copernican Revolution and missed their center of gravity. The military areas and settlements were often as vast as the cities where they had been built, sometimes even bigger than that; those areas with high landscape and environmental value, once employed as training camps, are left blighting without dealing with recovery, restoration, demolition and reconstruction.

DIEGO CLERICUZIO
Diego Clericuzio was born in 1977, and is a director and filmmaker. He is outstanding for his authorial insight on italian business video industry: he made commercials, interpretations, evocative sensation and institutional videos for the biggest Italian and foreign businesses. His videos have been screened in Washington, Miami, New York, Singapore, Sidney, Abu Dhabi, Dubai, Doha, Johannesburg, Amburgo, Paris and London. In 2010 he founds Dmovie Communication, in 2014 Dmovie. As a documetarist, his attention is drawn by human behaviour and its evolution in history. His latest works are Rex, la nave dei record and A country of primroses and barracks.